Sometimes classically strict, sometimes frivolous and bright-American style in the bathroom interior is difficult to fit into any framework and give a clear definition. If you look at history, the American nation was formed as a result of the assimilation of many nationalities – it all started with the Spanish expansion, then the British continued, and they were joined by the Dutch, Germans, Italians – people went from all over Europe to the New world. Therefore, the American style arose as a result of a mixture of many cultural traditions and trends. Nor can we discount historical milestones in the development of the United States. However, to a greater extent, the formation of the American style of design was influenced by the English classical style. The rapid lifestyle in major cities of the United States has become a prerequisite for the birth of a modern style – in the American interpretation-the style of contemporary. Practical minimalism in restrained tones-this is how you can characterize this design direction.

Modern American style in bathroom design is a minimum of details and full functionality, neutral gray-white color scheme and plumbing without decorative excesses. This interior will fit harmoniously with the freestanding baths from the Viva Lusso collection-models Corelia, Karolina, Tulip. In the design of the American bathroom, black accents are often used to give the interior a certain drama. 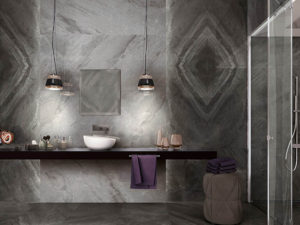 6 things to consider when choosing a bathroom tile design:

And 4 types of tiles that are correct in design: